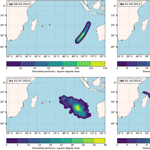 Abstract. On 7 March 2014 (UTC), Malaysia Airlines flight 370 vanished without a trace. The aircraft is believed to have crashed in the southern Indian Ocean, but despite extensive search operations the location of the wreckage is still unknown. The first tangible evidence of the accident was discovered almost 17 months after the disappearance. On 29 July 2015, a small piece of the right wing of the aircraft was found washed up on the island of Réunion, approximately 4000 km from the assumed crash site. Since then a number of other parts have been found in Mozambique, South Africa and on Rodrigues Island.

This paper presents a numerical simulation using high-resolution oceanographic and meteorological data to predict the movement of floating debris from the accident. Multiple model realisations are used with different starting locations and wind drag parameters. The model realisations are combined into a superensemble, adjusting the model weights to best represent the discovered debris. The superensemble is then used to predict the distribution of marine debris at various moments in time. This approach can be easily generalised to other drift simulations where observations are available to constrain unknown input parameters.

The distribution at the time of the accident shows that the discovered debris most likely originated from the wide search area between 28 and 35° S. This partially overlaps with the current underwater search area, but extends further towards the north. Results at later times show that the most probable locations to discover washed-up debris are along the African east coast, especially in the area around Madagascar. The debris remaining at sea in 2016 is spread out over a wide area and its distribution changes only slowly.