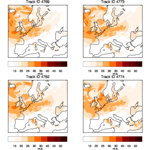 Abstract. The XWS (eXtreme WindStorms) catalogue consists of storm tracks and model-generated maximum 3 s wind-gust footprints for 50 of the most extreme winter windstorms to hit Europe in the period 1979–2012. The catalogue is intended to be a valuable resource for both academia and industries such as (re)insurance, for example allowing users to characterise extreme European storms, and validate climate and catastrophe models. Several storm severity indices were investigated to find which could best represent a list of known high-loss (severe) storms. The best-performing index was Sft, which is a combination of storm area calculated from the storm footprint and maximum 925 hPa wind speed from the storm track. All the listed severe storms are included in the catalogue, and the remaining ones were selected using Sft. A comparison of the model footprint to station observations revealed that storms were generally well represented, although for some storms the highest gusts were underestimated. Possible reasons for this underestimation include the model failing to simulate strong enough pressure gradients and not representing convective gusts.

A new recalibration method was developed to estimate the true distribution of gusts at each grid point and correct for this underestimation. The recalibration model allows for storm-to-storm variation which is essential given that different storms have different degrees of model bias. The catalogue is available at http://www.europeanwindstorms.org .