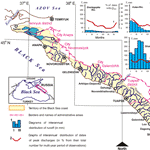 Abstract. The inundation situations on the Black Sea coast of the Krasnodar territory for the period from 1945 until 2013 were analysed and the main types of inundations at the coast are described. Synoptic factors of the formation of extreme precipitation and rainfall floods, features and regularities of the downstream flood wave transformation in the rivers are also studied. Therefore, assessments of seasonal and maximum flow of the Black Sea coast rivers for the period of hydrometric measurements were done. Regularities of change of the occurrence of inundations and their characteristics on the coastal terrain were analysed, for a year and on a perennial timescale.

Most catastrophic and exceptional inundations arise in the summer and in early autumn. Small inundations during the remaining year reflect the seasonal distribution of river flow and floods in the Black Sea rivers. Extensive and sometimes extreme precipitation dominates the river flow regimes. The seasonal distribution of small and moderately dangerous inundations reflects, on average, a water regime of two groups of rivers of the coast – to the north and to the south of the Tuapse River. To the north of the Tuapse River, floods prevail from November until March (up to 70 % of observed floods took place in this period) as a result of precipitation and winter snowmelt during frequent thaw periods. In winter, high waters often overlap to form a multi-peak high water of 2–3 weeks' duration. In the summer and in early autumn we observe a steady low flow. The total amount of runoff increases both in a southeast direction, and with the altitude of the river basins. Interannual variability of mean annual runoff, as well as maximum runoff, on the contrary decreases in the southern direction and with an increasing area of the river basins. The coastal high waters of the rivers of the Sochi part of the coast are typical at any time of the year, but more often floods in the cold season result from incessant rain, and thawing snow. Annually up to 25 floods have been observed. The principal reason of such distribution is the increase of extreme rainfall in the warm season.

Orographic features of the coast and detailed features of rainfall only cover a small number of local river basins and a limited area. The geographical correlation of individual rainfall and subsequent floods ceases to be statistically significant for distances over 40–60 km.

The annual flow cycle is mainly determined by two seasons, winter/spring and summer, with strong and weak flows, respectively; almost 71 % of all catastrophic and exceptional inundations took place in July–August (71 %) and in October–November (29 %). The characteristic features of dangerous floods are their rapid formation and propagation, a significant increase of water level (up to 5–7 m and more) and the multiple increase of water discharges in comparison with low flow period.

Quantitative assessments of risk, hazard and damage for the population and economic activities from accidental inundations in the valleys of the Black Sea coast rivers show that economic and social losses from inundations at the Black Sea coast of the Krasnodar territory are some of the highest in the Russian Federation. The basic conclusion from recent inundations is the need to consider not only the lower reaches and mouths of the Black Sea coast rivers where the main part of the social and economic development of the coast is concentrated, but also whole river basins and catchments. Further, an analysis of the efficiency of the measures applied at the coast to mitigate inundations and their after-effects is provided.